The building is designed in a relatively compact scale. The internal space layout has been solved by keeping functionality in mind. The building plan has 12 blocks for groups rooms, out of which 2 are nursery groups. According to the plan, the first floor of the two-story building has 12 group rooms, a kitchen, staff wardrobes, recreational and auxiliary rooms. The hall complex with a wardrobe and utility rooms to the right of the entrance, forms a separate one-story unit. From the second floor there is also access to offices and a meeting room in addition to the group rooms. 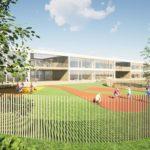 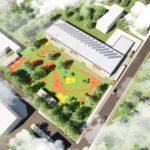